*** Just a warning. This is going to be 5 straight minutes of me bitching. I don’t really like to bitch. And it’s a beautiful day here and I turned in my draft of my literature review and I leave for Ecuador in less than a week, so it feels really terrible to be in the mood to bitch. But here we are.

The night before last, the Artsy Engineer nearly passed out after administering my trigger shot. And this morning I was inseminated. Like an infertile heifer. Which was a little weird, of course, but not that weird, actually. And the small weirdness is not what I want to talk about.

If you all remember, I had this grand plan last week to talk to my RE about changing my letrozole protocol based on a couple of studies I read. Truthfully, I didn’t expect her to actually do anything differently. She is the expert. And she obviously has reasons for using the protocols that she uses. But I did expect her to be nice about turning me down. And, ya know? Her words were weren’t awful (mostly). It was just this “you KNOOOW who that sort a protocol is used for, don’t you?” kind of stuff. But her facial expression conveyed displeasure and her tone was accusatory and belittling and it made me feel like a child. During that appointment, she also scoffed at the fact that I choose to continue to chart, even though it “will just be confusing” because of the medications. I explained to her that I knew that, but that I liked doing it because it gave me a false sense of control over the situation. Which she clearly thought was a stupid reason, because she proceeded to “strongly advise” (her words) me to discontinue charting to “save myself a little time.” Come ON, lady. Taking my temperature in the morning takes me all of 18 seconds.

I knew her bedside manner left something to be desired before this, though, so I wasn’t too surprised by this whole interaction. I only thought, this woman is not my favorite. She and I are not going to be buddy, buddy. But that’s cool. Ok, fine.

Then, today, I went in for the IUI (the success of which I still feel totally hopeless about), and she managed to one up herself. Her mood was pretty light at the beginning, so much so that I thought, “Man, she’s actually being friendly! She must be having a really good day!!” I even made a clever joke after accidentally writing my own name where I was supposed to write in the name of the person who gave the semen sample they were about to inject into my uterus. And she laughed. But then when the whole thing was over and done with, I mentioned that I was opting out of the CD 21 serum progesterone test and the hcg test, because I was going to be out of the country.

And no joke. The woman shot me daggers. She then proceeded to tell me that I they would not have done the IUI if they had known that they would not be able to monitor me in the second half of the cycle. She asked if I had told anyone about our trip. Which, I did. And she asked what it was that made me think it would be okay for me to skip out on this portion of the protocol.

Now. Had I knowingly neglected mandatory portions of the protocol, I would deserve this kind of reprimand. But y’all. The last three cycles, I have been told repeatedly that the CD 21 progesterone test and the beta are OPTIONAL. Nobody mentioned that this changes to ABSO-FUCKING-LUTELY NECESSARY-OR-ELSE-THE-BABY-YOU-HAVEN’T-EVEN-CONCEIVED-YET-WILL-DIE when you go from timed intercourse to IUI. And why on earth would I even think to ask? Everything else about this cycle is the exact same as my last three. Why does husband versus catheter insemination make a difference? I’m completely stymied. Still. But, apparently (as she made very clear), it will be my fault if I have an ectopic pregnancy or a low-progesterone induced early miscarriage because I failed to follow the protocol.

Guys, this made me feel like shit. I know it’s silly. I’m not going to get pregnant from this. And, even if I did, the presence or absence of a progesterone test and a beta will not make a difference. I know this. I already supplement with progesterone. Yes, I could have an ectopic. But so could anybody who ever conceived ever. And, no. They won’t be able to see if the egg was fertilized, so they’ll have less data. I guess that’s a bit of a bummer, but I knew that going in.

But somehow this woman succeeded in making me feel like an asshole.

She treated me as if I am some unruly teenager, who isn’t taking this seriously and who is making decisions all willynillylike based on whatever and a bit of selfishness. And she is soooo wrong. And I know not everyone is going to like me and that’s fine. But for some reason, I desperately want this particular human to like me.

I think it’s because I’m relying on her for something so huge.

If her SART stats weren’t the best in the area, I would be looking for a new provider right now.

But. On a more positive note.

I’m inseminaaaaaated! Even though this cold cold lady made me feel like I tricked her into it. (And, I know I keep saying there is no chance of it working, but of course I know there is a chance, albeit small. And of course there is a bit of hope, albeit tiny.)

I have more updates on my letrozole protocol and my RE’s reaction to my suggestions. But those are going to have to wait for now. Right now I am supposed to be writingwritingwriting this damn beast of a literature review. Clearly, I’m having a hard time staying focused.

Because, I wanted to quickly show you this pair of socks.

Months ago, I signed up for one of Cristy’s sock exchanges. To my delight, I was paired up with dear Sadie. And guys. Sadie sent me these colorful socks and this colorful card and it made my week. Now I need to finally get hers in the mail. It is coming, Sadie. It is coming, friend! 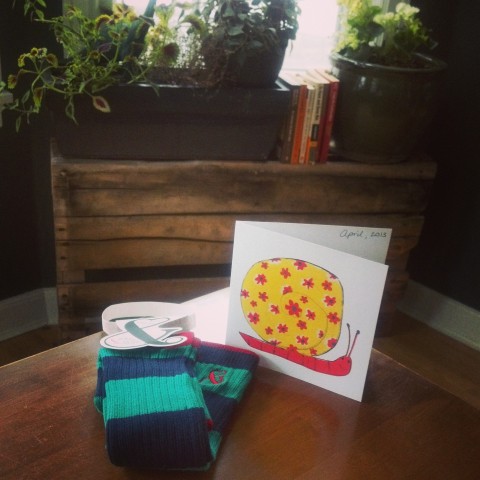 You are currently viewing the archives for May, 2013 at lamenting the lentil.