The near death of modesty and coming out of the closet

I have been hesitant to show my face on here. My actual face, I mean.

I’ve always been a pretty private person. So, I suppose that talking about trying to make a baby on the internet is something that scares me. And I guess that the idea of linking these words to my face makes me feel more exposed.

But I’ve been thinking about this a lot. I want to be brave. I want to be one of those women who provides an in for other women to talk openly about infertility and miscarriage. I think I’ve mentioned that I’m one of the first of my friends and coworkers to try to conceive. I don’t want anyone else to feel like they have to keep this battle to themselves if this sort of thing happens to any of them in the future (which it will, because we know how common it is even though no one talks about it). I don’t want anyone else to feel ashamed.

I deal with difficult things by talking about them, but, until recently, I only talked to a very select few. We’re talking about like two people other than the Artsy Engineer. I didn’t even tell ANYONE we were trying until after the miscarriage. And then I told a lot of people. Like, everybody (not really, but a lot more bodies than I would have ever guessed). About all of it. I needed support. I needed people to understand. So the lips got loose. And I feel good about it. People care. And I can get things out of my head out of my head out of my head and into the world.

But I still worry about the internet. I worry that some future client or future patient will find me out. And will care. Which they probably won’t. And I probably won’t either.

So, I’m going to quit screwing around and just show you my face, because I feel like I need to do this. I won’t promise that it will be here forever. I may freak out and take it down one day. No promises. But, for now. Me. Selfie style. 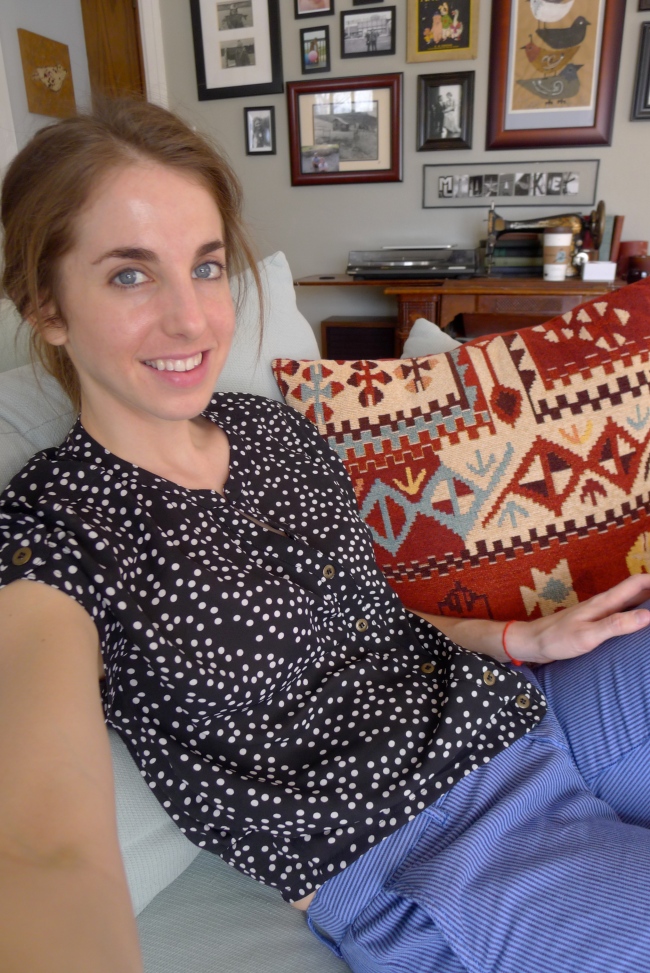 Meanwhile, in case you all are interested. I’m at 10 dpo. My temperature dipped significantly today. I’m trying to not read too much into it. Last cycle it stayed up until a couple of days after I discontinued the progesterone, so I just expected that it would do the same thing this time around. Bleh. Whatever. I’ve been good at ignoring the two week wait so far. I’m going to try to keep that up for another couple of days. Tomorrow, I’ll be posting promised photos of my stitch fix, which arrived at a perfectly distracting time. And, right now, I’m going to go read for book club. And maybe watch some basketball. Peace, y’all.

Help a sister out? Cancel reply

You are currently reading The near death of modesty and coming out of the closet at lamenting the lentil.